Home » Protect Your Identity » How to Report Identity Theft

If your identity has been compromised, you need to act quickly!

When identity theft strikes, you need to act quickly to minimize any damage or financial loss. The less you have to fight over money and deal with paperwork, the better. And the earlier you catch and report identity theft, the less financial liability you have. That means lower out-of-pocket losses and hopefully less hassle for you.

If you know that access to a specific account was stolen, the first step is to contact the company where you have the account with and let them know. They’ll suggest steps to secure your account, including canceling and replacing your card. Acting quickly also limits your liability for charges you didn’t make. In most cases, you won’t be held liable for charges you didn’t authorize as long as you report them immediately.

Next, place an initial fraud alert on your credit reports. Fraud alerts make it more difficult for credit to be opened in your name. Go to the website of any of the three big credit reporting agencies — Equifax, Experian, or TransUnion — and request one. It’s free, and the information will be shared between all three.

A fraud alert won’t necessarily prevent someone from using the accounts you already have, however. So, if your account is compromised, then it needs to be closed.

Step 3: Submit an identity theft complaint to the FTC

You will also receive an identity theft action plan, that will help you understand all the steps you need to take to recover.

Identity theft is still theft. So, you need to let the police know that you’ve been a victim of theft. Take your identity theft affidavit from the FTC to your local police department to report the theft. You will receive an official police report that you will need to take any next steps you want to take. This includes prosecuting the perpetrator of the theft (if they can be found).

With an identity theft affidavit from the FTC and an official police report, it  will be much easier to stop and reverse the damage from identity theft. They’ll enable you to get a 7-year fraud alert on your credit file (initial fraud alerts only last 90 days, but are renewable). Wit that, you get two free credit reports from each credit bureau per year. Normally you only get one per year, but these are on top of that. 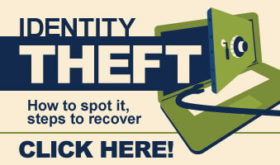 Use the tips in this Identity Theft Protection infographic to protect your personal data and information from ID theft and credit fraud. For more information on protecting your identity CLICK HERE